The Poet and the Murderer: A True Story of Verse, Violence and the Art of Forgery por Simon Worrall 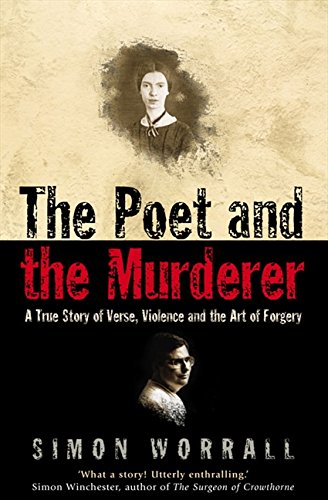 Críticas ‘A cracking tale: the labyrinthine story he uncovers is beautifully paced and as complex as any conspiracy theory: a work of non-fiction, it reads like a thriller.’ Observer‘Utterly enthralling’ Simon Winchester, author of ‘The Professor and the Madman’‘A terrific story, terrifically told’ New York Daily News‘An adventurous and sensational narrative’ Peter Ackroyd, The Times Reseña del editor The true story of a brilliantly forged Emily Dickinson poem sold at Sotheby’s in 1997. The author’s detective work led him across America to a prison cell in Salt Lake City, where the world’s greatest literary forger, Mark Hofmann, is serving a life sentence for double-murder.When the author sets out on the trail of a forged Emily Dickinson poem that has mysteriously turned up for sale at Sotheby’s in New York, he finds himself drawn into a world of deception and murder. The trail eventually leads, via the casinos of Las Vegas, to Utah and the darkly compelling world of Mark Hofmann, ex-Mormon and one of the most daring literary forgers and remorseless murderers of all time. As the author uncovers Hofmann’s brilliant, and disturbing, career, he takes the reader into the secret world of the Mormon Church and its controversial founder, Joseph Smith.Deeply researched but with the narrative pace of a novel, Worrall’s investigation into the life and crimes of this charismatic genius is a real-life detective story you simply won’t be able to put down. On the way, you will meet an eclectic cast of characters: undercover detectives and rare book dealers, Dickinson scholars, forensic document experts, hypnotists, gun-dealers and Mormons.As the story reaches its gripping climax, Hofmann becomes trapped in the web of his own deceptions … and turns to murder. Ver Descripción del producto